Security architecture diagram of iOS provides a visual overview of the different technologies which will be explain in detail in the next sections.

For devices with a Secure Enclave, the Secure Enclave co-processor also utilizes a secure boot process that ensures its separate software is verified and signed by Apple.

The objective is to find a vulnerability in one of the steps of the boot chain to gain an maintain root access on the device.

Attacking this chain of trust is how jailbreaking works. Jailbreak authors need to find a bug somewhere in this chain to disable the verification of the components further down the chain. Exploits of the Boot ROM are the most desirable because this is the one component Apple can’t change in a software update.

Basically, there are two types of jailbreak, described as follows:

Since the release of the iPhone 3GS, Apple has built encryption into the hardware and firmware of its iPads and iPhones. Every iOS device now has a dedicated Advanced Encryption Standard (AES) 256-bit crypto engine that sits between the flash storage and main system memory. The engine works in conjunction with the SHA-1 cryptographic hash function, which is implemented in the hardware as well, to reduce overhead for cryptographic operations.

The Secure Enclave is a coprocessor which uses encrypted memory and includes a hardware random number generator. It provides all cryptographic operations for Data Protection key management and maintains the integrity of Data Protection even if the kernel has been compromised. Communication between the Secure Enclave and the application processor is isolated to an interrupt-driven mailbox and shared memory data buffers.

The Secure Enclave is also responsible for processing fingerprint and face data from the Touch ID and Face ID sensors, determining if there’s a match, and then enabling access or purchases on behalf of the user.

Applications are shunted into a virtual container that consists of detailed rules specifying which system resources a subject is allowed to access, such as network resources, file read and writes, the ability to fork processes, and so on. On OS X you can control some of how your application is sandboxed, but on iOS all third-party applications are run with a single restrictive policy.

In terms of file access, processes are generally confined to their own application bundle directory; they can read and write only the files stored there. 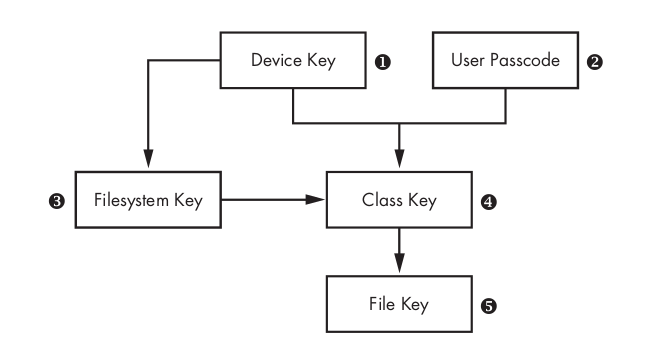 Every time a file on the data partition is created, Data Protection creates a new 256-bit key (the File key [5]) and gives it to the hardware AES engine, which uses the key to encrypt the file as it is written to flash memory using AES CBC mode. It is used to encrypt the file contents. This key is stored in the files’s metadata.The Class Key [4] is a dedicated key for a particular Data Protection class so that files classified with different protection levels use separate cryptographic keys.

The Filesystem Key [3] is a global encryption key used to encrypt the file’s security-related metadata after the metadata is encrypted by the Class Key.

The Device Key [1], also known as the UID key, is unique for each device and accessible only by the hardware AES engine, not by the OS itself. This is the master key of the system, as it were, which encrypts the Filesystem Key and the Class Keys.

The User Passcode [2], if enabled, is combined with the Device Key when encrypting Class Keys. 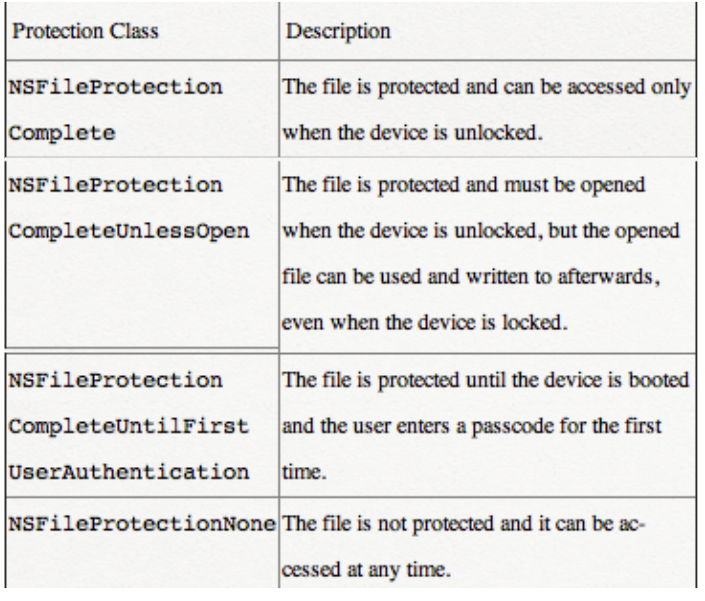 Many apps need to handle passwords and other short but sensitive bits of data, such as keys and login tokens. The iOS Keychain provides a secure way to store these items.

Once the iOS kernel has started, it controls which user processes and apps can be run. To ensure that all apps come from a known and approved source and haven’t been tampered with, iOS requires that all executable code be signed using an Apple-issued certificate. Mandatory code signing extends the concept of chain of trust from the OS to apps, and prevents third-party apps from loading unsigned code resources or using self-modifying code.

Unlike other mobile platforms, iOS doesn’t allow users to install potentially malicious unsigned apps from websites, or run untrusted code. At runtime, code signature checks of all executable memory pages are made as they are loaded to ensure that an app hasn’t been modified since it was installed or last updated.

Once an app is verified to be from an approved source, iOS enforces security measures designed to prevent it from compromising other apps or the rest of the system.

All third-party apps are “sandboxed,” so they are restricted from accessing files stored by other apps or from making changes to the device. This prevents apps from gathering or modifying information stored by other apps. Each app has a unique home directory for its files, which is randomly assigned when the app is installed. If a third-party app needs to access information other than its own, it does so only by using services explicitly provided by iOS.

The iOS applications are bases on the Model-View-Controller design. This concept is really useful while performing dynamic analysis. 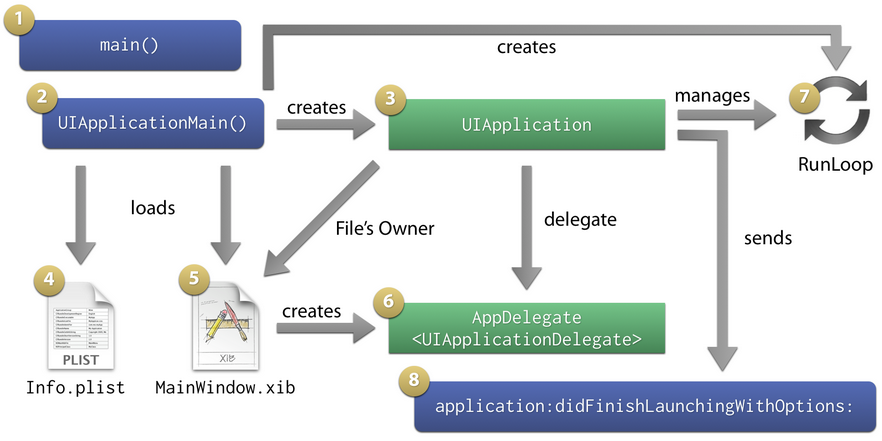 So let’s say Apple provided you with the basic bird class (with hatching, growing, pooping, flying and egg-laying behavior already built in).

Here now in this more advanced age of object-oriented design, there’s a concept (design pattern) called “delegation” and it’s a cool way to easily implement custom classes, assuming ahead of time that you’ll likely never need to worry about anything else about creating birds other than specifying how they differ from each other — how they look (size and color) and how they chirp, eat and mate.

So, the people who designed the CFBird class have set up a “protocol” which specifies the “delegate methods” (kinda like “callbacks” in C) which is all your new class will need to implement to create your custom bird, and you’re done! Basically the class is going to call into your code when your particular bird is drawn, when it chirps, eats and mates. These tasks are “delegated” to you in your subclass of CFBird.

Everything else is handled for you, and you only need to concern yourself with what is different about your bird, and forget about what is the same amongst all birds, simplifying your life and making things more consistent.

In your code, when you specify your new class of bird, in the @implementation you’ll make reference to a protocol, and by doing so you are telling the system that you agree to implement the methods specified in that protocol which will detail exactly how your particular bird is going to look, chirp, eat, and mate. Done and done.

The subclassing comes first, and the possible delegate methods follow if you specify a protocol to follow.”

In Objective-C you don’t call a method (like in Java or C++), you send a message. The syntax for these messages involves a keyword-infix notation for arguments inside of a set of square brackets. The names of messages are called “selectors”, and the Objective-C compiler translates these into calls to objc_msgSend.