How to use Frida in iOS devices: command line, Frida Gadget and scripts (JavaScript and Python).

It’s a dynamic code instrumentation toolkit. It lets you inject snippets of JavaScript or your own library into native apps on Windows, macOS, GNU/Linux, iOS, Android, and QNX. Frida also provides you with some simple tools built on top of the Frida API. These can be used as-is, tweaked to your needs, or serve as examples of how to use the API.

Show all the applications of the device

Dump the entire view hierarchy of a window

Mapping each instance variable name to its current value

Call method (inside onEnter or onLeave)

The following scripts can be found in my Github Trelis24

Python script that given a script and a app bundle, it starts the app, inject de script and resume the execution. 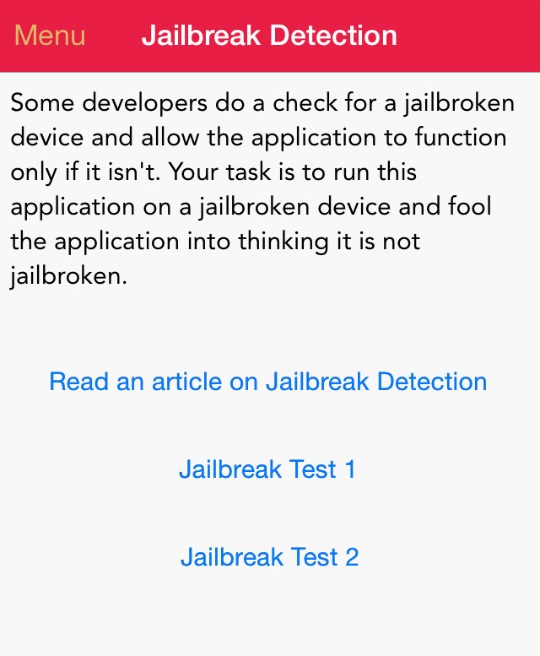 List applications. The ones with a PID are currently active: 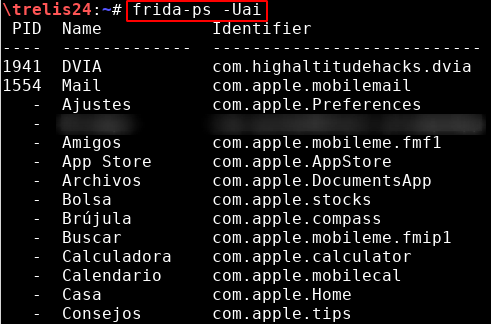 With frida-trace, hooking into all methods whose name has the substring “jail”:

With frida-trace, hooking into all methods of the class JailbreakDetectionVC:

With frida-trace, hooking into an specific method an class:

In order to detect which methods are called, one way is to hook into all methods of a class. In the following image you can see how the view was loaded first and then the method “jailbreakTest1Tapped:” and “isJailbroken” are called:

Of course, in the device the following message is shown: 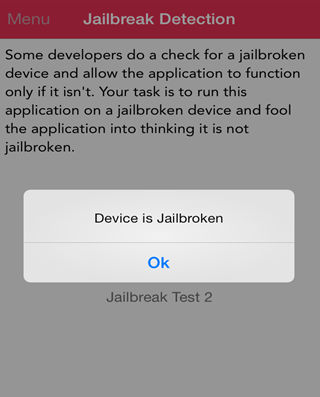 Due to the jailbreak detection control only shows an alert text box and it does not terminate the application execution, I will execute the scripts via terminal. Otherwise, I would have used the python script in order to inject the scripts before the applications terminates.

First of all, you should look for classes of your interest. In this example, I have looked for the string “jail” (find_classes.js):

The only class with the substring “jail” is “JailbreakDetectionVC”:

An other way to find classes is to look into their methods. The only drawback is that depending of the string, a lot of results can be found. I have looked for the string “jail” in the methods (find_methods.js):

The class “JailbreakDetectionVC” is in the list, however there are a lot more classes I am not interested in: 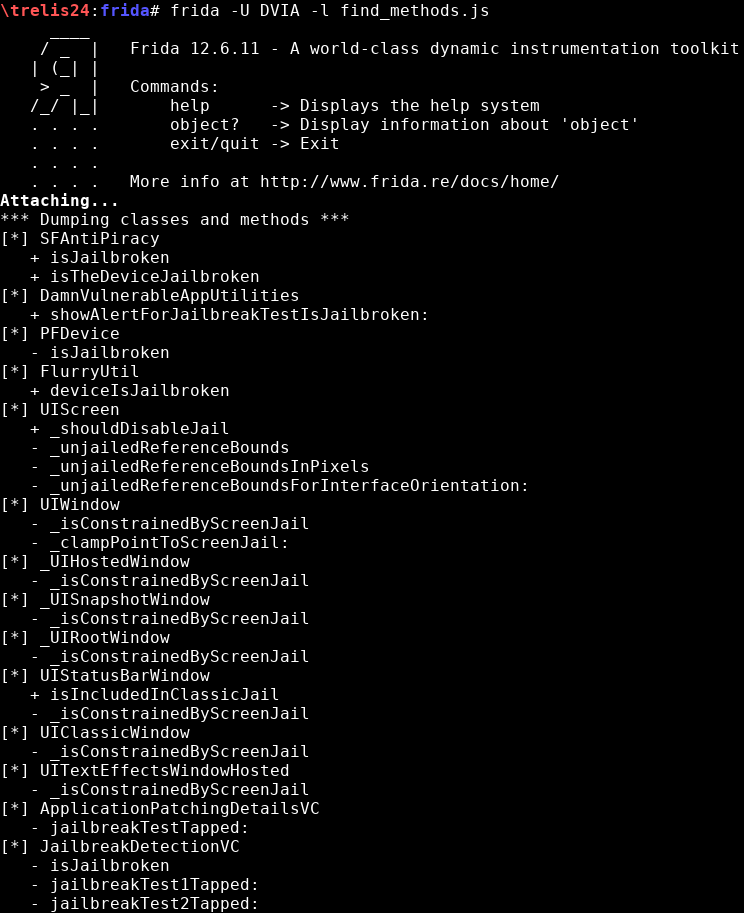 Now that I have detected the class, let’s print all its methods (find_methods.js):

There are a total of 7 methods: 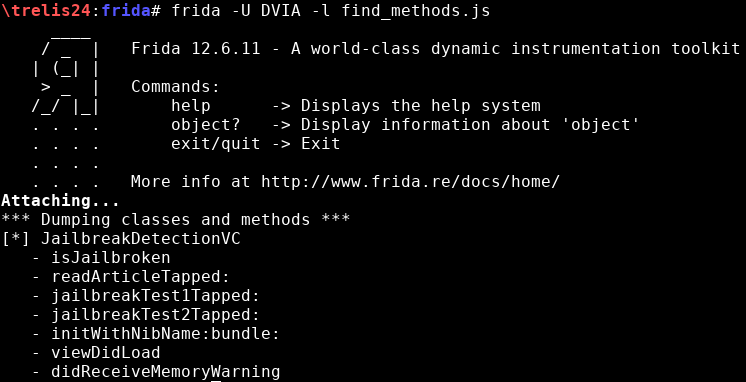 Now that I know the class, I can hook into the methods in order to understand how are they called (hooking.js):

In the code below, I have commented the line “print_arguments(args);”, which prints the arguments send into the methods, because it prints information not needed for this example.

After the script execution, it shows: 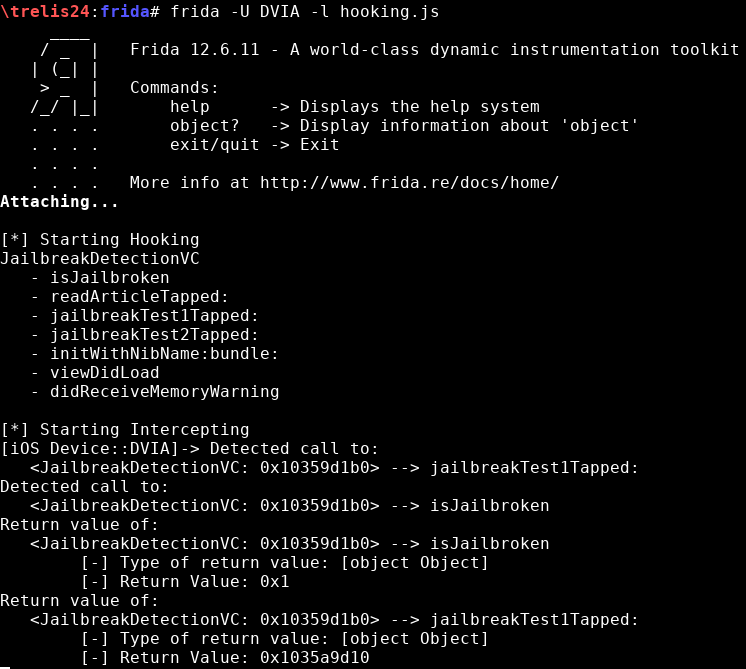 I can deduce that “isJailbroken” might be de method which checks if the device is jailbroken due to it returns a “false”. However, if you want to be sure, static analysis can always be done. Check my post about bypassing Jailbreak with IDA.

Finally, I will try to replace the return value of “isJailbroken” so it always returns “false” (replace.js):

The script hooks into the method. When isJailbroken returns the 0x1, frida intercepts it, changes the value to 0x0 and resume the execution: 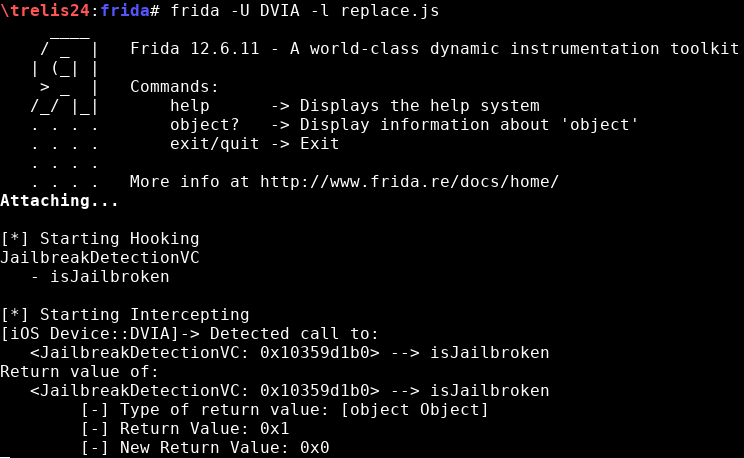 After changing the return value from 0x1 to 0x0, the alert textbox is: 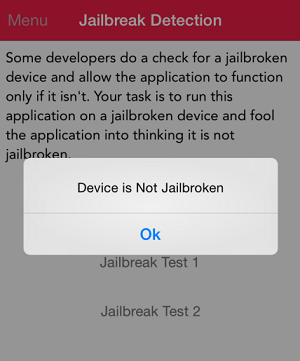